More often than not, the time spent on collecting the information necessary to properly define an adequate model of the (part of the) process you are interested in is much greater than the time spent by a simulator program in finding a solution. Most publications and textbooks present the model equations without a description of how the model equations have been developed. Hence, to learn dynamic model development, novice modellers must study examples in textbooks, the work of more skilled modellers, and/or use trial and error.
During the last decades there tends to be an increasing demand for models of higher complexity, which makes the model construction even more time consuming and error-prone. Moreover, there are many different ways to model a process (mostly depending on the application for which the model is to be used): different time scales, different levels of detail, different assumptions, different interpretations of (different parts of) the process, etc. Thus a vast number of different models can be generated for the same process.
All this calls for a systematisation of the modelling process, comprising of an appropriate, well-structured modelling methodology for the efficient development of adequate, sound and consistent process models. A Modelling tool building on such a systematic approach supports teamwork, re-use of models, provides complete and consistent documentation and, not at least, improves process understanding and provides a foundation for the education of process technology.
As promised in our last blog post, this months blog presents some of the concepts of Mobatec Modeller, a computer-aided modelling tool built on a structured modelling methodology, which aims to effectively assist in the development of process models and helps and directs a modeller through the different steps of this methodology. The objective of this tool is to provide a systematic model design method that meets all the mentioned requirements and turns the art of modelling into the science of model design.
Modelling is an acquired skill, and the average user finds it difficult. A modeller may inadvertently incorporate modelling errors during the mathematical formulation of a physical phenomenon. Formulation errors, algebraic manipulation errors, writing and typographical errors are very common when a model is being implemented in a computing environment. Thus any procedure which would allow to do some of the needed modelling operations automatically would eliminate a lot of simple, low-level (and hard to detect) errors.
Mobatec Modeller is a computer-aided modelling tool which is designed to assist a model designer to map a process into a mathematical model, using a systematic modelling methodology. The main task solved by Mobatec Modeller is the construction and manipulation of the structure and definition of process models. The output of Mobatec Modeller is a first-principles based (i.e. based on physical insight) mathematical model, which is easily transformed to serve as an input to existing modelling languages and/or simulation packages, such as our Mobatec Solver, but also Process Studio’s e-Modeler (Protomation), gProms (Process Systems Enterprise), Aspen Custom Modeler (Aspentech), Modelica (Dynasim AB), Matlab (Mathworks), or any other Differtial Algebraic Equation (DAE) Solver. For certain solvers (Mobatec Solver and e-Modeler) a Simulation Environment is available, such that the build dynamic process models can be excecuted, tuned, tested, optimised, etc.
One of the handy features of Mobatec Modeller that will help a model designer a lot when setting his process model is the Automatic component distribution.

The distribution of all involved species (i.e. chemical and/or biological components) as well as all reactions in the various parts of the process must be defined in most process models. This represents the Species Topology, which is superimposed on the physical topology and defines which species and what reactions are present in each part of the physical topology.
The definition of the species topology of a process is initialized by assigning sets of species (and/or reactions) to some systems. Species as well as reactions should be selected from corresponding databases. So, before the species topology can be defined, a species and a compatible reactions database must be defined. Such a database contains a list of species and a list of possible reactions between those species. A species and reactions database should, of course, be editable by the user in order to satisfy the specific needs of the user.
After the assignment of the injected species and injected reactions to a specific system, the modelling tool will (re)calculate (parts of) the species distribution. This means that the species will propagate into other systems through mass connections. Within the systems, the species may undergo reactions and generate ”new” species, which in turn may propagate further and initiate further reactions. This eventually results in a specific species distribution over the elementary systems, which is referred to as the species topology of the processing plant. 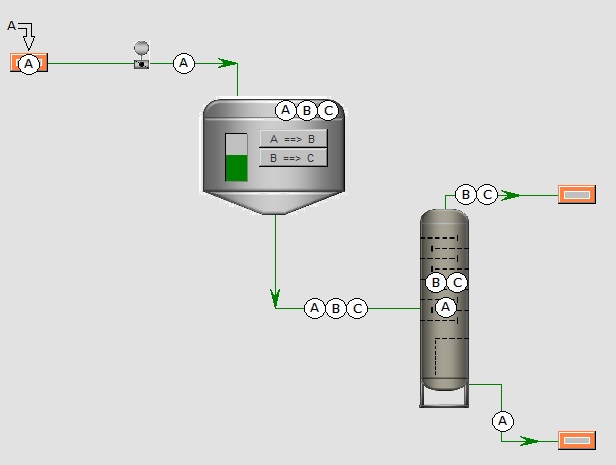 To enhance the definition of the species topology, permeability and directionality are introduced as properties of mass connections. They constrain the mass exchange between systems by making the species transfer respectively selective or uni-directional.
The injection of a reaction into a system does not automatically imply that this reaction can ”happen” in that system and thus that the products of this reaction can be formed. If not all reactants of a reaction are available in a system, then this reaction cannot take place in this system. In such a case, the system will have an injected reaction but this reaction will not be “active”. So, the reaction will not take place in the system in this case. When the species distribution is changed and the reaction can take place again, it will automatically be ”activated”.
It should be noted that the presence of an ”activated” reaction in a system does not imply that this reaction has to happen in this system. It implies that this reaction may happen in this system, depending on the operating conditions in the system and the driving force for this reaction.
Whenever an operation is executed which modifies the current species distribution, a mechanism is activated which updates the species distribution over all elementary systems and connections of the affected mass domains.
After the definition of the Species Topology, Mobatec Modeller can automatically generate the dynamic part of the process model, namely the (component) mass and energy balances for all the elementary systems, using the conservation principles. The resulting (differential) equations consist of flow rates and production rates, which are not further specified at this point. In order to fully describe the behaviour of the process, all the necessary remaining information (i.e. the mechanistic details) has to be added to the symbolic model of the process. So, in addition to the balance equations, other relationships (i.e. algebraic equations) are needed to express transport rates for mass, heat and momentum, reaction rates, thermodynamic equilibrium, and so on. The resulting set of differential and algebraic equations (DAEs) is called the equation topology.
In the next blog we will explore how Mobatec Modeller helps you in setting up correct (algebraic) equations for each part of your model.
This blog and the next blog focus a bit on how our tools can help model designers in setting up their models. Normally our blog treats more generic topics, related to modelling, but several people asked me to devote one or more blogs to the differences between our solutions and other available software ;).
Please let us know if you found this information valuable or specify a topic you would like to see discussed on one of the next blogs.
To your success!
Mathieu.
———————————————–