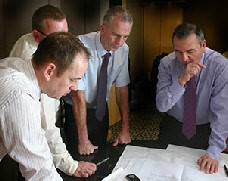 “A hazard and operability study (HAZOP) is a structured and systematic examination of a planned or existing process or operation in order to identify and evaluate problems that may represent risks to personnel or equipment, or prevent efficient operation. The HAZOP technique was initially developed to analyze chemical process systems, but has later been extended to other types of systems and also to complex operations such as nuclear power plant operation and to use software to record the deviation and consequence. A HAZOP is a qualitative technique based on guide-words and is carried out by a multi-disciplinary team (HAZOP team) during a set of meetings.” (source: Wikipedia)
As you can read from the definition on Wikipedia, the HAZOP study is traditionally a qualitative study. To give it a more quantitative character, several papers have been written in the last decade that suggest to use steady-state analysis and dynamic simulation to complement the HAZOP study. By definition, a (dynamic) simulation is the imitation of the operation of a real-world process or system over time, which means that in principle it should be the most realistic way of representing an actual process. Combining HAZOP with dynamic simulation could provide the means for investigating (and demonstrating) the consequences of deviations from normal operating conditions. Above all, dynamic simulation could enable a HAZOP team to quickly investigate and test the effectiveness of various suggested strategies dealing with emergency situations.
In the article “Combining HAZOP with dynamic simulation—Applications for safety education” the authors claim to have developed a “Quantitative HAZOP” approach which is more adequate for educational application than the qualitative HAZOP procedure. They elaborate extensively on a relatively simple example (by including all equations and variable and parameter values that describe the model) to demonstrate the proposed procedure.
I agree with the authors that using such an integrated approach can help quite a bit in the process safety education, especially when a good graphical user interface (GUI) is provided. It looks, though, that a considerable effort is needed to construct (and test) both the model and the user interface, before it is useful as a helpful tool to aid in HAZOP studies.
The question that arises is: “Can such an integrated approach be extended and also be helpful for ‘real’ industrial HAZOP studies?”. In these cases typically larger parts of large processes are being evaluated and setting up a model in the way the authors did for the educational example could take several weeks to months (maybe even more). That would, in most cases, not be acceptable.
If setting up a dynamic process model with reasonable accuracy could be done in the order of magnitude of a few days or weeks (depending on the size of the process), this would certainly change the attitude towards using dynamic simulations to aid with HAZOP studies.
As a challenge, we decided to build a simulation model (including a user interface), based on the semi-batch reactor (oxidation of 2-octanol) of the quoted article, within (max) one day of work. A bit against our modelling methodology we chose to use the equations as presented in the article, just to see if it is possible to rebuild such a model in a short period. We had to change some equations quite a bit, though, since with our methodology mass and energy balances are generated automatically and constitutive relations are normally never time dependent, but only state dependent. The result is, of course, not perfect (and could be easily improved), but it does give an impression of what is possible nowadays. (Side note: Most of our time was spent trying to interpret the original model equations, since they gave rise to a lot of questions and I had quite some doubts on the validity of several of the equations)

Click here to download the model file that we build. It can be loaded, compiled and run in the demonstration version of Mobatec Modeller.
By having a simulation of the process as a support tool, a deeper, easier and more complete study could be carried out. That would provide a systematic screening of process deviation associated with possible hazardous events, determining the threshold values that may lead to such events and enabling the examination of a particular design for the adequate safe range of operation.
As the article rightfully concludes, dynamic simulation should be seen as a tool that complements the traditional HAZOP procedure, it does not replace it. There are still many processes that cannot be modeled accurate enough due to a lack of enough quantitative information, particularly in emergency situations.
I am curious what your thoughts on this subject are. Under which conditions would a dynamic simulation tool be interesting for doing HAZOP studies?
Please post your ideas in the comment box below, such that we can go one step closer to enhancing the HAZOP methodology by adding a flexible dynamic simulation of (part of) the process!
To your success!
Mathieu.
———————————————–